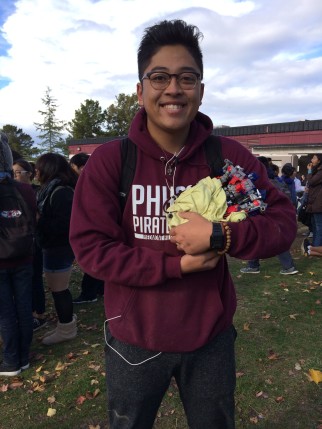 Fellow PHHS senior Michael Tran has started to sell his personal clothes and longboards for money starting in October because his father has been laid off.

He started using Facebook to advertise his personal items.

“Basically I looked at what I had, and I was like no; I had way too much right now and I didn’t need all of this.  I need to clean out my stuff and be able to sustain myself because my parents are barely able to sustain the house so how are they supposed to buy me food.”

Recently, his dad got laid off and Michael needs to raise as much money as he can for himself to use because he might lose his house.  He started selling his things to help his parents.

“My dad got laid off a couple months ago, and my mom hasn’t been able to sustain us with my dad’s unemployment.  He’s been thinking of reaching into his retirement funds, but you don’t want that because it’s your retirement funds.”

Michael has definitely been persevering through all of his problems.

“Well this is the worst time too because college apps are coming up.  I felt kind of overwhelmed by it all; not only do I have to worry about my future, but I also have to worry about right now and how to get by.  Eventually, I was able to calm down and figure out ways to go for it.  Now, a way for me to get money is to potentially intern at Zeemee, a way for colleges to know you more as a person.”

His friends are supportive of Michael. Randy Tau, PHHS alumnus, explains, “I saw that he was selling his belongings. I didn’t want to buy something that he once valued so I got him a 50 dollar gift card to Safeway.”

In addition he has been trying to sell his items and thinking about intern shipping, Michael also does custom design on cruiser boards with wood staining and graphics for $110.