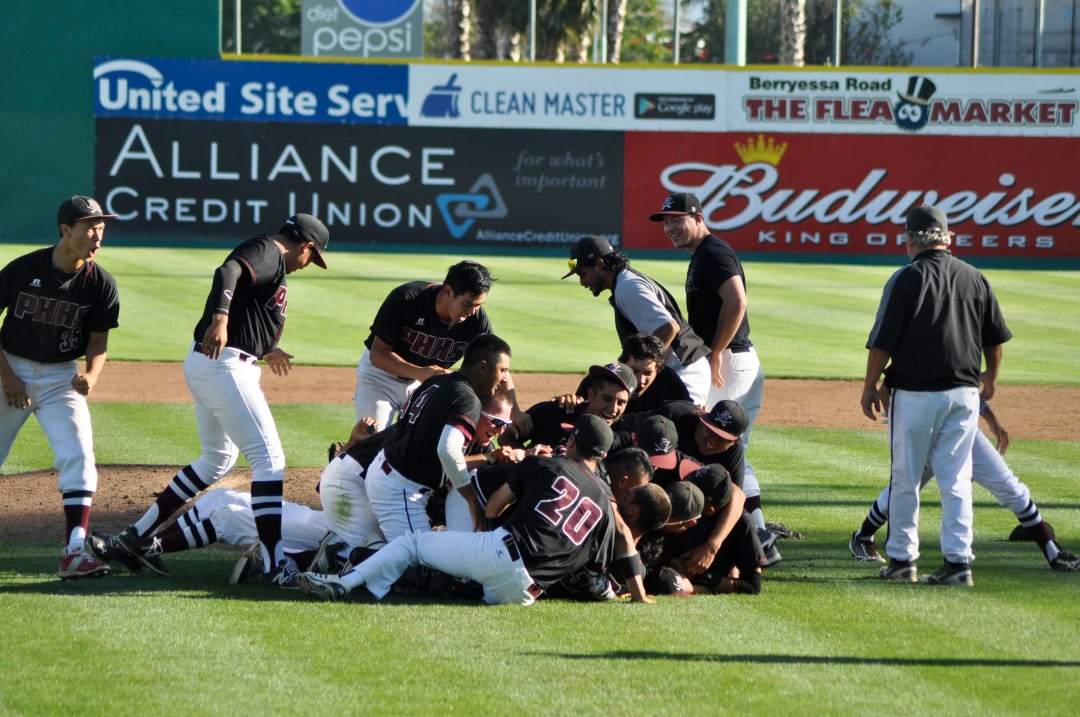 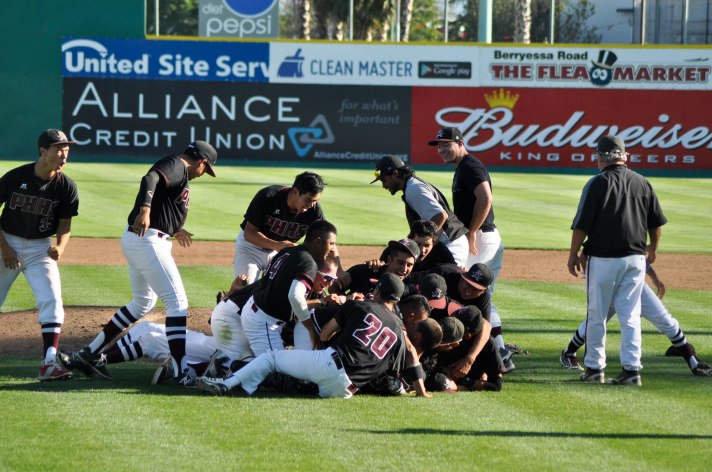 BADABING BADABOOM! The Piedmont Hills Baseball team run to join together in a doggy pile celebration of their win against Pioneer.

Immediately after the swinging strikeout, catcher Danny Garcia threw the ball to first basemen John Kelly, costing the Pioneer’s their last and final strike.  The boys ran and piled on each other, extremely overwhelmed in joy and completely in disbelief that they had finally won the whole thing.

On the morning of May 30, the Piedmont Hills Baseball team stopped for breakfast at Denny’s for one last team bonding before they went on face Pioneer High at the CCS Baseball Finals.

After a tough but victorious match against Milpitas just two days earlier, Piedmont Hills was ready for their next opponent.

They showed up to Pioneer’s field at about 5:30pm and immediately did their warm ups and stretches.  Their coach gave them a quick pep talk, firing and hyping them up for the game.

Right when the game began, Piedmont Hills hit four doubles just in the first inning, giving them an early lead of 5-0.  Starting pitcher Christian Castaneda pitched all five innings and gave Pioneer no mercy and no chance to score.

“Cameron Castaneda pitched a gem, and they weren’t able to hit it past our defense,” informed left field Matthew Leffler.

Five out of the six batters were able to get on base in the first inning and continued to pound all of the pitches Pioneer threw at them.

By the fourth inning, Piedmont Hills’ Pirates led 10-0.  Finally, with two outs and two strikes, Castaneda struck out the batter to win the game.

“It was the best feeling ever,” expressed designated hitter Danny Bobias.  “We were all huddled on the mound [which] turned into a dog pile.”

Their four hour practices full of game situated scenarios involving defense and offense had paid off.

The Pirates really showed up with their A-game on, being the first Piedmont Hills Baseball team and the only 16th seed team to ever win CCS.

“After we won, I felt like I was on cloud nine.  It was the best thing I have ever felt,” commented Bobias.