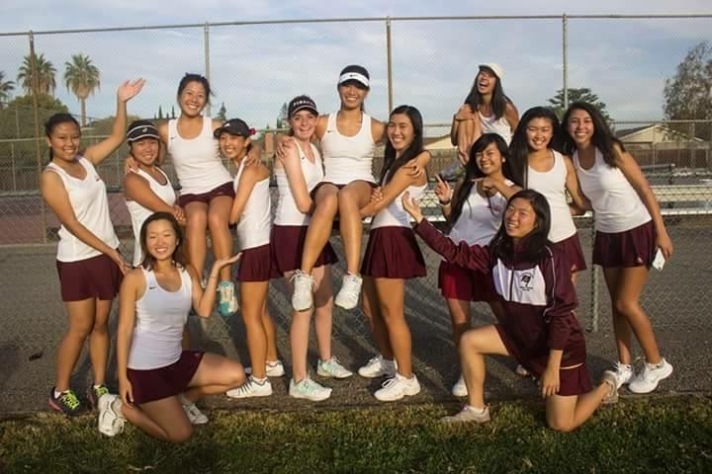 CHEERS! The girls celebrate their season of hardwork and dedication.

The PHHS Varsity Girls Tennis team made it to CCS (Central Coast Section) Championships after winning against Westmont High School on Thurs., Oct. 29.  They won with a score of 5-1, ensuring Piedmont Hills a place in CCS this year.  The first game for CCS was on Mon., Nov. 9 against Archbishop Mitty High School with a score of __ at the Santa Clara Bay Club.

In order to prepare for CCS, the team has worked extra hard with more drills and practices.  Training included various warm ups such as down the line shots (where the player hits the ball straight down the line of the tennis court to the other side).

In contrast to normal practices, which include both JV and Varsity members, practices for CCS only consisted of the Varsity team.

“We usually prioritize the JV but for practice for CCS we only have Varsity members play,” states Varsity member Hannah Lim on the difference between normal practices and practices for CCS.

Last year’s Varsity team consisted of mostly seniors, making this year’s team almost new.  However, with bonding sessions such as movie nights, the girls have become a very tight-knit team.

“In the beginning of the year–since a lot of seniors left–we weren’t that close, but by the end of the season we got super close,” says Varsity player Katelynn Grajeda.

JV and Varsity Girls Tennis team members both continue to work hard on their skills, striving to improve their abilities with every game they encounter this season. The team’s close-knit and friendly attitude will keep them together through their victories and losses throughout this tournament.