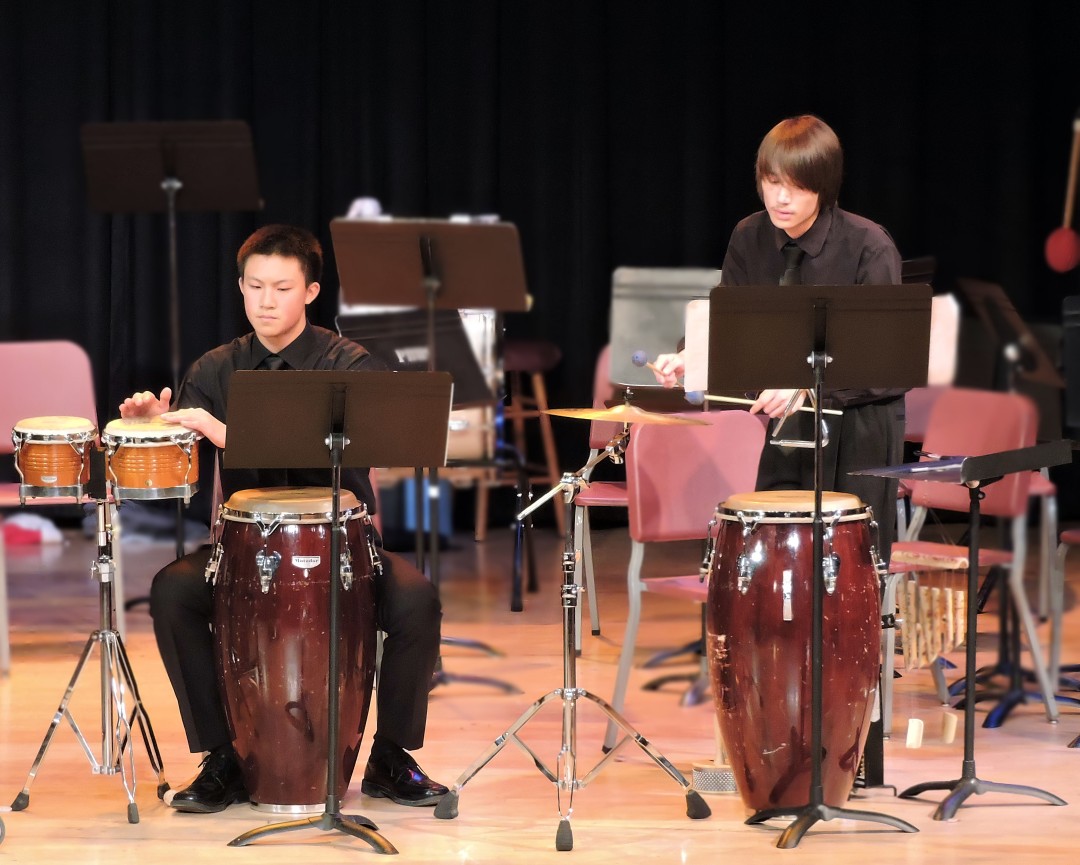 Walking in a Winter Concert Land

The doors of the L-Building opened up, welcoming folks of all ages to enjoy two wonderful concerts brought by the PHHS Music Department students.  Part one of the Winter Concert began with A ‘Suite’ Sleigh Ride, the instrumental concert, on Dec. 4 and ended with Home for the Holidays, the choir concert, which took place last Wednesday.

During the piece ‘Today is the Gift’, the drama and Concert Choir students made a special appearance.  The choir members, together with the chosen vocalists and egg shakers from the Wind Ensemble, sang a simple hymn after the riveting Martin Luther King Jr. ‘I Have a Dream’ speech spoken by drama students.

Concert choir introduced a new technique using mason jars and their cellphones during ‘Sympathy.’  The audience members were asked to type in links from the back of the pamphlet on their smartphones.  Each attendee opened a different link according to the section they were sitting in.  Right before Concert Choir sang, the sounds of birds chirping erupted throughout the L-Building.

“It’s based on a poem called ‘I Know Why the Caged Bird Sings’ and we have recordings of these little birds tweeting and we put the recordings inside the mason jars,” mentions Concert Choir member Athena Nguyen.  “The song is about how a bird is trapped in its cage so we’re trying to give an image of an actual bird trapped inside the jar to make the (performance) come to life.  Also, there is a soloist and she has a recording of her singing at the end of the song and the very last words that she sings (are) ‘I know why the caged bird sings.’  She put this really big jar on top of the recording when it says (that) and it represents a bird singing inside of the jar.”

After the intermission, the Percussion Ensemble enchanted the audience with their unique pieces ‘Cloud Forest’ and the ‘Nutcracker to Go!’  The Percussion Ensemble is not a music class at PHHS, but is a group of percussionists from Wind Ensemble and Symphony Orchestra gathered together.  They practice once a week during seventh period or after school.

“We are just doing it [Percussion Ensemble] for fun. We have really good percussionists at this school,” comments orchestra teacher Emily Ray.  “Last year I started the Percussion Ensemble and I found this piece that was really hard, and had a couple of them practiced over the summer.  So when they came back in August they were pretty good at it, and we just kept practicing.  That was a college level piece [‘Cloud Forest’] that they played.”

According to Ms. Ray, the Percussion Ensemble have only practiced ‘Nutcracker to Go!’ for less than two weeks since she didn’t give them the music until just before Thanksgiving break.

The choir students have started working on the new pieces for the Winter Concert since the end of the Fall Concert which amounts to about seven weeks.  The pieces were chosen based on the strengths and weakness of the choral students.

“After the first concert of this year, we completely moved on.  We immediately started to practice (and) we (have) constantly been practicing,” says concert choir sophomore member Steven Lu.

A $5 admission fee was required to enter the show.  Delectable treats such as cookies, custard-filled donut holes and hot chocolate were sold at a concession stand, providing warmth and comfort for all who watched the show.  All of the money earned through the concerts will fund the music programs, allowing them to buy new equipment and go on more trips, such as this coming trip to Italy.