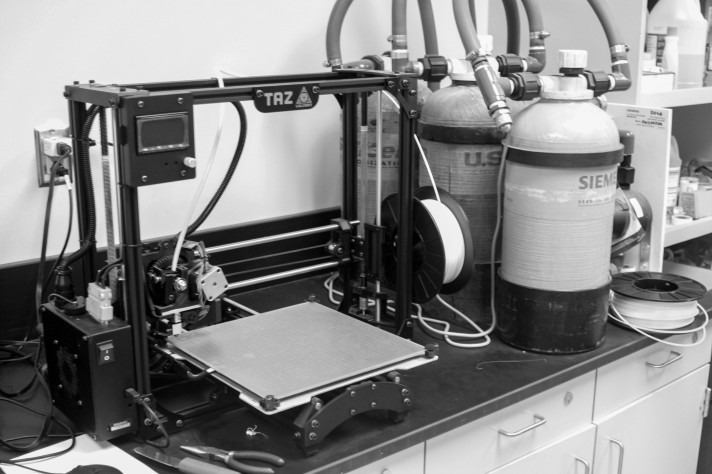 Classes might just get more interesting now that the Science Department has purchased a new 3D printer.  According to Physiology teacher David Vasques, Science teacher Archie Kregear spearheaded the plan to purchase the printer.

“He had the idea for a couple years, but it took a while to get the grant,” answered Mr. Vasques when asked when the idea was conceived.

Gathering all of the funds needed for the order took about ten months.  The purchase was made possible due to contributions “from a grant, some boosters, and a bunch of money from several different sources.” The ESUHSD contributed $1,000 in the form of a grant.

“We put the money in an account and then purchased it,” stated Mr. Vasques.

With this new technology, many teachers are thinking of ways to incorporate it into their lesson plans.

“I’m still exploring my options, which is researching what I can do.  I want to incorporate this into an inquiry based design but I’m just struggling with how to implement it,” said Biology teacher Jason Dries.

“I gave them all my Biotech students an open project, design something Biotech related and print it,” stated Mr. Kregear.

When asked why he wanted to buy a printer for the Science Department, Mr. Kregear answered, “For students to have exposure to 3D printing will help them prepare for college and get a concept of how to manufacture materials.” However, science classes aren’t the only ones who are planning to use a printer. CAD (Computer Aided Design) classes have always been making designs, but were not able to do anything else with them until now.

“I think the CAD class is getting one too, or already got one.  Hopefully there will be some coordination between us and the CAD classes,” commented Mr. Vasques.

With permission, students not in classes that use 3D printers will also be able to print their own designs.

“You would probably go through with Kregear.  It’s not completely open. Obviously we want to be able to monitor what’s going on.  If it’s not being used for a certain project already,” said Mr. Vasques.

Although he has no plans to use the printer in his lesson plans yet, Mr. Dries has been able to print some things.

“I have made a very important Iron Throne from Game of Thrones and a self-watering planter this morning, which took a shocking amount of time to do,” he commented.